Skip to main content
53k
74.6k
87k
88.9k
The UN is on track to run out of money by the end of the month, according to documents released earlier this week. All permanent UN members have made their full regular payments to the intergovernmental body, except the United States. Secretary-General Antonio Guterres said on Monday that the UN is currently running a deficit of $230 million. The UN is reportedly instituting “additional stop-gap” measures to ensure salary and entitlement pay. The intergovernmental body will postpone meetings and cut back on travel.

The on-time payment period ends at the end of February, and by that point this year only 17 percent of countries had paid their dues in full. Six months later 64 percent of the budget has been paid. Despite this, just under half of all nations have not paid their dues.

President Trump has routinely complained about the alleged skewed payment of United Nations dues system, where the U.S. pays 22 percent of the $5.4 billion regular budget. All member states are legally required to make payments to both the regular budget and the peacekeeping budget, two separate budgets with two different payment calculations. The UN considers gross national income, population, and debt burden when coming up with its operational budget.

Earlier this year, the UN announced cutbacks to the human rights division. The cutbacks are the result of delayed member state payments and the long-term payments nations owe, of which the U.S. owes a hefty portion. As a result, the international body is cutting back on human rights committees, which are designed to oversee adherence to treaties that uphold international laws relating to children’s rights, combat civil and political repression, discrimination against women, torture, and racial discrimination. The human rights office is one of the three pillars of the United Nations, but it receives less than 4 percent of the organization’s budget. 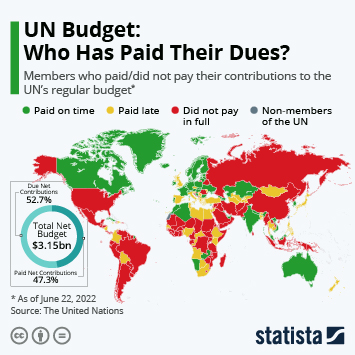 This chart shows the member states that paid their contributions to the United Nation's regular budget.