40k
57k
41k
9.6k
Former U.S. ambassador to Russia, Michael McFaul, has slammed President Trump's lack of action against Russia in an op-ed for the Washington Post. McFaul claims that Russia is "the greatest threat to the sovereignty of other nations", citing its actions in Georgia and Ukraine, as well as interference in the U.S. presidential election and violation of British sovereignty by attempting to assassinate Sergei Skripral.

In particular, he criticized Trump's UN speech which was devoted to defending sovereignty even though it failed to mention Russia, with only a brief reference to Germany's reliance on Russian gas. With the House likely to go on recess by the end of the week and due to return after the November balloting, it remains unlikely that the U.S. will pass any new sanctions on Russia until that point.

So far, the U.S. has levied seven sanctions against Russia this year, the same number as the European Union, according to a list compiled by Radio Free Europe/Radio Liberty. The U.S. decided to extend economic sanctions by one year in January 2017 before imposing sanctions on 38 individuals and entities on June 20, making for 2 sanctions in total. That is a far cry from 2014 when the war in Ukraine was at its height and Malaysia Airlines flight 17 was shot down, killing all 298 people on board. That year, the U.S. and EU imposed 13 and 14 sanctions on Russia respectively. 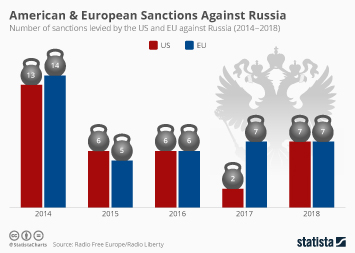 This chart shows the number of sanctions levied by the US and EU against Russia (2014-2018).