Published by Statista Research Department, Mar 10, 2022
Gazprom is one of the largest oil and gas companies by revenue worldwide and one of the largest extractors of natural gas. Its home country, Russia, holds some of the world’s largest natural gas reserves. Gazprom supplies gas to domestic industries and consumers and trades it abroad, via pipelines or in its liquefied form (LNG), mostly to Europe and Asia. The company holds a monopoly in the Russia's pipeline gas exports. Nearly 478 thousand employees work for Gazprom around the globe, more than for any other oil and gas company.

Russian energy giant Gazprom takes its roots in the Ministry of Gas Industry of the Union of Soviet Socialist Republics (USSR), which was a separate energy entity prior to 1989. Large reserves of natural gas in Siberia and the Ural and Volga regions initiated the Soviet Union's push for gas production in the 1960s and 1970s. In 1989, the ministry was converted to Gazprom, a state concern dedicated to gas production, and in 1993, the company became privatized. However, at the beginning of 2000s, the Kremlin imposed tighter control on oligarch companies, and Gazprom's majority was held by the Russian government. Currently, Gazprom, a public joint stock company (PJSC), is one of the largest businesses in Russia. In the energy sector, it is also active in LNG production and trade as well as oil production and refining. The company also owns subsidiaries in other sectors such as finance, media, and aviation.

Europe has been a significant importer of Gazprom’s natural gas products. Netherlands and Germany are Gazprom’s largest customer countries outside former Soviet countries based on gas sales volume. Gazprom transports much of its products through pipelines, many that travel through Ukraine to various European countries. Since mid-2000s, several gas disputes have arisen between Ukrainian company Naftohaz Ukrayiny and Gazprom due to natural gas supplies, prices, and debts. The current contract of Gazprom with Ukraine as a gas transit state runs until 2024.

Furthermore, the company supplies gas to Germany across the Baltic Sea via a pipeline Nord Stream, whose twin Nord Stream 2 was completed in 2021 and was waiting for regulatory approval. Other gas routes of Russian gas to Europe include the pipelines Yamal – Europe passing through Belarus, Poland, and Germany, and Blue Stream going to Turkey via the Black Sea.

In the following 8 chapters, you will quickly find the 46 most important statistics relating to "Gazprom".

The most important key figures provide you with a compact summary of the topic of "Gazprom" and take you straight to the corresponding statistics. 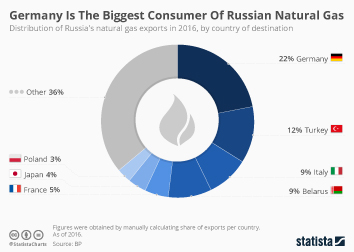 Germany is The Biggest Consumer of Russian Natural Gas