88.9k
As the leaves turn shades of yellow, crimson and rusty-red, the heat of summer is starting to give way to the wet and windy conditions of fall. For most people, their summer holiday is probably becoming a distant memory as the evenings get shorter and the temperature falls. Some might be lucky enough to still have some vacation time left after summer and their attention will no doubt be turning towards the best way to use the remaining time off. For some, that will mean a quick autumn break or an early Christmas. For others, however, that vacation time will remain unused with work firmly the key priority.

Depending on the country and company, some employees lack the comfort and flexibility of taking their vacation days into the following year, meaning they will become void if left unused. A recent Ipsos survey lists the countries where workers are most and least likely to use up all of their vacation days in 2018. Saudi Arabia has the highest share of people agreeing that they will use up the rest of their time off this year (81 percent), followed by Germany (79 percent). It is slighly lower in both the UK and Russia (74 percent).

The U.S. is known to get a much bleaker deal on vacation days than Europe and interestingly, 58 percent of workers still say they will not manage to use all of their days off by the end of the year. The share of workers across the border in Canada saying they will use their remaining time off is even less at 55 percent. In Asia, the likelihood of all vacation time getting used up is even lower with only 42 percent saying they will use their total allowance in China, along with a dismal 34 percent in Japan. 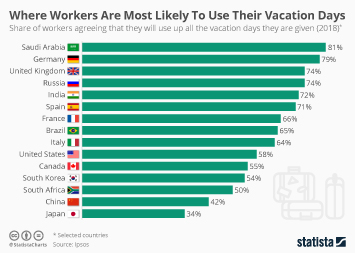 This chart shows the share of workers agreeing that they will use up all the vacation days they are given (2018).