Skip to main content
53k
74.6k
87k
88.9k
When the mobile industry is showing off the latest advancements in smartphone technology at the Mobile World Congress in Barcelona this week, foldable screens, sophisticated camera systems and of course 5G will doubtlessly steal most of the headlines. And yet, as smartphone penetration is nearing saturation levels in many developed countries, it’s easy to forget that billions of people don’t have a smartphone at all, let alone one that folds into a tablet or has five camera lenses.

According to a report published by GSMA, the global industry group representing mobile operators and other industry players, worldwide smartphone adoption stood at just 60 percent of all mobile connections in 2018, with many regions seeing adoption levels considerably lower than that. The lowest level of smartphone adoption was observed in Sub-Saharan Africa at 36 percent, with North America at the other end of the spectrum at 80 percent.

While having a smartphone may sound like a luxury rather than a necessity, it is worth noting that mobile internet access is a key enabler of socio-economic development, especially in countries that lack the infrastructure to provide fixed internet to large parts of the population. With this in mind, one can only hope that the GSMA’s forecast of smartphone adoption in 2025 turns out to be accurate. The industry group expects global smartphone penetration to hit 79 percent by then with regions that are currently trailing behind seeing particularly strong growth. 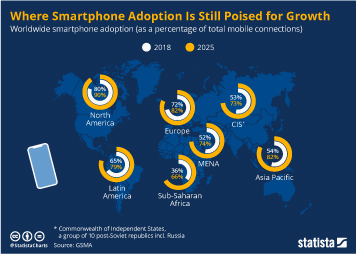