In the United States, many companies have earned plaudits for innovative working environments and motivated workforces, enabling them to stand out from the rest and attract the very best talent. Statista partnered with Forbes to find out which companies and organizations across the U.S. are giving their employees the very best deal by asking 60,000 workers at large and midsize companies, nonprofit institutions, government agencies and U.S. divisions of multinationals to evaluate their employers on a range of factors such as atmosphere, remuneration and working conditions.

This year, healthcare providers score high, with the Children's Hospital of Philadelphia in rank 1 and the Memorial Sloan Kettering Cancer Center, the Mayo Clinic as well as two University of Texas entities, the UT Southwestern Medical Center and the MD Anderson Cancer Center, also among the top 10.

Second-ranked Southern Company is headquartered in Atlanta and is the second-largest utility company in the United States, serving millions of gas and electricity costumers across the country. Nasa rounds off the top 3.

The only retailer in the top 10 ranking is conducting its business online: Carvana buys, sell, finances and delivers used cars out of Tempe, Arizona. Pre-pandemic, there still had been two major brick-and-mortar retailers - Trader Joe's and Costco - among the top 5.

You can browse the full rankings on Forbes here. 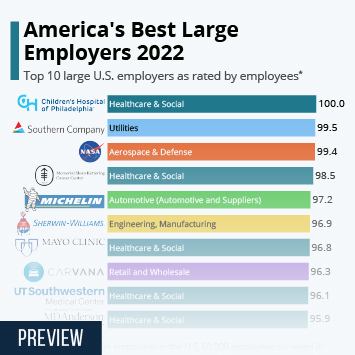 This chart shows the top 10 large U.S. employers as rated by employees.