Many world leaders like to govern by tweet but who is reaching the most people? At this time, it's Indian Prime Minister Narendra Modi, who has been growing his followers continuously and is approaching Donald Trump’s record of 121.5 million followers at the time of the suspension of his Twitter account in January of 2021. As of Nov 22, Modi had almost 118 million followers between his two accounts.

Trump ceased to be a head of state and a Twitter user around the same time in connection with his comments made in person and on the social network leading up to the insurection at the U.S. Capitol in Washington D.C. on Jan 6. Upon the inauguration of successor Joe Biden several days later, the former U.S. president's official @POTUS account was archived.

Biden decided to start with a blank slate for the @POTUS account, a decision that has set the current U.S. president back in the world leaders ranking. Biden comes third behind the Pope, counting 47 million followers. Two thirds come from his personal account, @JoeBiden.

Many heads of state use several Twitter accounts to promote themselves and their policies. Pope Francis actually has 52 million followers between nine different language accounts, the biggest being English (18.8m), Spanish (18.7m), Portuguese (5m) and Italian (5m).

The remainder of the top 8 ranking consists of Muslim leaders. The most followed is Turkish president Recep Tayyip Erdoğan, who also has dedicated accounts in Arabic, Russian, French, German and Spanish.

There are also heads of state, however, to whom the use of Twitter seems less important. German chancellor Angela Merkel leaves the tweeting to government spokesperson Steffen Seibert (@RegSprecher), who has a comparably meager 1 million followers. 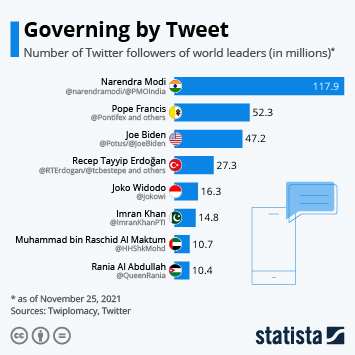 This chart shows the world leaders with the most followers on Twitter as of Nov 25, 2021.