Potentially emboldened by the coronavirus crisis and the search for perceived safe-haven assets, the cryptocurrency started its ongoing rally after an initial virus crisis shock in early 2020. In 2019, the decentralized currency reached its highest valuation on June 26 (approximately $13,000) around the time of Facebook’s announcement that it was starting its own cryptocurrency, Libra. The announcement played a part in reviving interest in Bitcoin after a prolonged period of losses and stagnancy that started in 2018.

Late 2017 and early 2018 was the heyday of Bitcoin, with a single coin fetching prices above US$15,000 at the time. As the coin’s value shrank subsequently, many thought the hype around cryptocurrency had blown over.

In May of 2020, Bitcoin experienced a so-called "halving" for the first time in almost four years. The halving cuts the reward Bitcoin miners receive for their transactions in half, making it double as hard to "produce" bitcoin. A Bitcoin halving is triggered after an increment of 210,000 Bitcoin have been mined. The total number of Bitcoin is capped at 21 million and the halving was Bitcoin's 88th, leaving 12 halvings until the supply of Bitcoin is depleated for good. Yet, as it gets harder and harder to mine, the frequency of halvings should continue to fall. 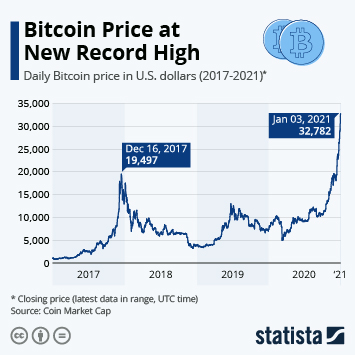