Bitcoin's price fell to a two-year low in November 2022 amid fears of how the collapse of crypto platform FTX would impact the overall market. BTC's price briefly dipped below 15,500 U.S. dollars on November 21 amid concerns for the future of Genesis Global Capital - a crypto lending firm with close financial ties to FTX. The implosion of FTX may continue to be felt among other traders or companies as well, as it ranked among the crypto exchanges with the highest market share well into 2022. Indices pointing toward a potential slowdown of the increase in central bank interest rates in, for instance, the United States, did mean the crypto market regained some calm in the following days. That said, one may wonder how popular Bitcoin was up until 200 and how its usage may be in the weeks to come as the FTX fallout spreads across the crypto community.

Popularity is not easy to measure

One way to measure the popularity of Bitcoin is to look at trading volume compared to domestic currencies from different countries. There are two things to keep in mind: First, a Bitcoin transaction of Bitcoin is not supposed to be retraced to its original starting point – as this is part of the coin's design. Second, Bitcoin to USD or GBP trading only takes up a portion of all Bitcoin trading. Consequently, figures for Bitcoin are often based on domestic surveys, asking domestic consumers whether they held the crypto as an investment tool or used the currency. People outside of the U.S. and Europe are more likely to own cryptocurrency in 2022, according to Statista's Global Consumer Survey. Google searches for the term "Bitcoin" by country back this up, with searches occurring the most from Africa and Latin America.

While the FTX bankruptcy did impact Bitcoin, the effects on other coins were considerably more noticeable. Ethereum, for instance, saw a spike in trade volume after a hacker started dumping ETH stolen from FTX. Some analysts, therefore, hoped the debacles reinforced the need for crypto regulation, possibly strengthening the crypto market after implementation. Other analysts are critical of this idea, stating that not all investors pay much attention to whether the market is regulated. Binance, for example, is self-regulated and does not have to follow the rules of a traditional market regulator. Professional traders can therefore use algorithms and price predictions that are otherwise not allowed in regulated financial markets.
This text provides general information. Statista assumes no liability for the information given being complete or correct. Due to varying update cycles, statistics can display more up-to-date data than referenced in the text. 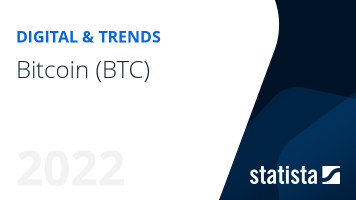 The most important key figures provide you with a compact summary of the topic of "Bitcoin" and take you straight to the corresponding statistics.