Skip to main content
53k
74.6k
87k
88.9k
In light of ongoing trade tensions, Brexit-related uncertainty and rising geopolitical tensions, the International Monetary Fund expects global growth to remain sluggish for the time being. According to the IMF’s latest World Economic Outlook, global economic growth is forecast at 3.2 percent in 2019, down 0.1 percentage points from the previous projection released in April.

For advanced economies, growth is projected at 1.9 percent in 2019 and 1.7 percent in 2020. While the United States and Japan were positive surprises in the first half of 2019, overall growth remains subdued due to sluggish final demand, slowing manufacturing activity and persistent uncertainties dragging on long-term spending by households and firms.

The 2019 growth forecast for emerging markets and developing economies was revised downward by 0.3 points from the previous projection to 4.1 percent. While China’s economy continues to be affected by the impact of tariffs on trade and investment adding to the woes of a structural slowdown, India’s outlook was clouded by weaker-than-expected domestic demand. The IMF also cut its growth forecast for Latin America by 0.8 percentage points to 0.6 percent, quoting mostly individual problems in countries such as Brazil, Mexico and particularly Venezuela, for the broader downturn.

For 2020, the IMF predicts a slight pick-up of global economic growth, noting however that the positive outlook is based on the assumption that several factors currently inhibiting growth will improve or resolve itself by 2020. “The projected growth pickup in 2020 is precarious, presuming stabilization in currently stressed emerging markets and developing economies and progress toward resolving trade policy differences”, the IMF writes. 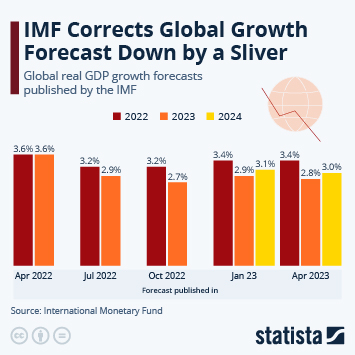 This chart shows IMF growth projections for the global economy as of July 2019.