A V-shaped recovery is what economists are hoping for in the current crisis, brought about by the coronavirus pandemic. Trying to contain the spread of COVID-19, countless countries around the world took drastic measures, resulting in a sudden drop of economic activity. Businesses operating in the travel, tourism and leisure sector lost their entire income stream practically overnight as strict social distancing rules were put in place, forcing airlines to ground their fleets, hotels to close doors and restaurants to pivot to takeaway service. But since the current crisis was brought on by an exogenous shock, many are hoping that the recovery will be just as swift as the downturn itself, once the outbreak is under control or a vaccine is found.

The World Bank cautiously backed such hopes with its Global Economic Prospects report, published on Monday. Assuming that “the pandemic recedes sufficiently to allow the lifting of domestic mitigation measures by mid-year in advanced economies and a bit later in emerging markets and developing economies, that adverse global spillovers ease during the second half of the year, and that dislocations in financial markets are not long-lasting" the World Bank expects global growth to rebound to 4.2 percent in 2021. The reports also notes that any near-term projections are subject to an unusual degree of uncertainty, however, warning that an alternative scenario sees the world economy shrink by 8 percent this year, followed by a sluggish recovery of just 1 percent in 2021. 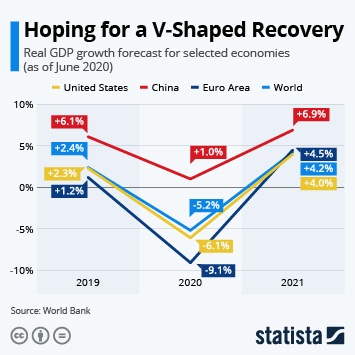 This chart shows a GDP growth forecast for selected economies (as of June 2020).