Skip to main content
53k
74.6k
87k
88.9k
Huawei is hosting its first developer conference in Dongguan, China tomorrow. There have been reports that Huawei will put its Hongmeng OS, its operating system, on display. Though the OS is reportedly used for IoT devices, like tablets and smart TVs, this could be the company’s first chance to answer the question of whether it can replace Google made Android software.

President Trump placed the company on the U.S. Entity List, which prohibits U.S. companies from selling without special permission. That poses huge problems for Huawei’s global supply chain. Huawei’s devices run on Google made Android operating systems, meaning that the company must provide its operating system to circumvent the U.S. action against them. The U.S. Department of Justice alleges that Huawei violated sanctions against Iran and could soon use 5G network upgrades to steal trade secrets, due to how close Huawei is with the Chinese government.

According to estimates from a survey of Chinese internet users that iiMedia Research conducted, a vast majority of Chinese users report being interested in using the company’s operating system, though there does seem to be some dual hesitation surrounding the enterprise. While respondents could pick multiple responses, 75 percent believe in Huawei’s technology and support the operating system for patriotic reasons, pointing to how the acerbic national tensions from the U.S.-China trade war have made their way into consumer sentiment.

Just under half of the internet users were worried about a restricted app variety or experience. Over a third of respondents were also concerned about the user-friendliness, citing hesitations around the OS “unsmooth usage.” 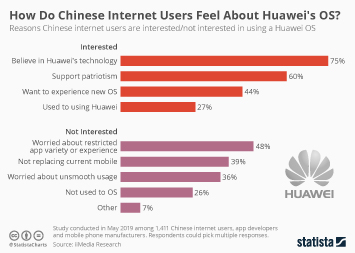 This chart shows the reasons Chinese internet users are interested/not interested in using a Huawei OS.

Mining in the Philippines