Today is World Teacher's Day which marks the adoption of the 1966 ILO/UNESCO Recommendation concerning the Status of Teachers. Co-convened in partnership with UNICEF, the International Labour Organization and Education International, it has been held annually since 1994. We are marking this year's World Teacher's Day with a look at salary levels for elementary/primary school teachers around the world. In 2019, a U.S. elementary school teacher could expect to earn an initial salary of $41,119, a paycheck that's higher than in many other developed nations, according to OECD data.

Within 15 years, U.S. elementary school teachers see their pay rise to just over $61,000 on average. Salary levels are similar north of the border in Canada where teachers starting out in elementary school take home $40,504 on average and just over $70,000 when they get 15 years of experience under their belts. Luxembourg has the best elementary teacher pay of any nation according to the OECD with a starting salary of $70,295 and then an average $102,630 when a decade and a half of experience is accumulated.

In many developed EU countries, new elementary teachers can expect to earn less than half of Luxembourg's starting salary with France and Italy key examples where new teachers take home just over $31,000. Even after 15 years in the job, their prospects don't improve too much with pay only reaching around $38,000 in both countries. Starting salaries are similar in developed Asian countries where elementary teachers start off with just under $30,000 in Japan and about $32,000 South Korea. Their long-term prospects are better, however, with teachers who have notched up 15 years of experiencing taking home $49,113 in Japan and $56,587 in South Korea. 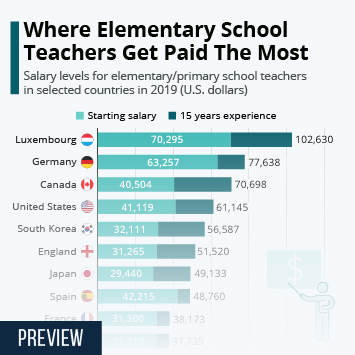