The economy might be strong in the U.S., but nearly 70 percent of Americans have less than $1,000 stashed away, according to GOBankingRates’ 2019 savings survey. The poll, released December 16, revealed 45 percent have nothing saved. The survey questioned 846 respondents November 25 to 26.

The discovery baffled Bruce McClary, the spokesman for the National Foundation for Credit Counseling. “It’s puzzling to me that if the economy is doing so well and that we’re so close to full employment, that consumer confidence is up … that we haven’t seen the numbers move much in people’s ability to save,” McClary told Yahoo Finance. “I find it very troubling that people can’t come up with $1,000 in a savings account to cover expenses without borrowing money.”

As he faces impeachment, President Donald Trump has lauded the strong U.S. economy, saying the American people care more about the economy than the impeachment inquiry.

“The Stock Market hit another Record High yesterday, number 133 in less than three years as your all time favorite President, and the Radical Left, Do Nothing Democrats, want to impeach me. Don’t worry, I have done nothing wrong. Actually, they have!” he tweeted December 17. “The new USA Today Poll, just out, has me leading all of the Democrat contenders. That’s hard to believe since the Fake News & 3 year Scams and Witch Hunts, as phony as they are, just never seem to end. The American people are smart. They see the great economy, & everything else!” 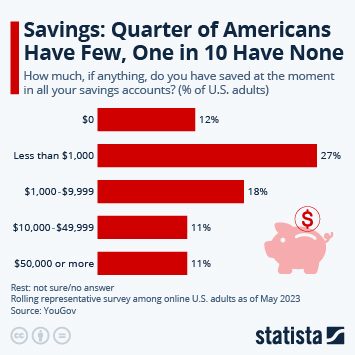 This chart shows how people answered the question, "How much money do you have in your savings account?"