Hindsight is golden - rarely was that phrase more fitting than in the case of Apple. If only you had put faith in that bespectacled man in a turtleneck sweater back in 2007, believed that he was indeed holding a revolutionary device in his hands, and invested $1,000 in his company right then, you would be looking at a nice return today.

That’s only part of the story though. If you had put your chips on Apple and Steve Jobs even earlier, say when the company surprised the world with the first iPod in October 2001, your investment would have grown to $265,796 by now. And if you had taken a leap of faith the day Steve Jobs formally returned to Apple, a company in turmoil, in September 1997, you could easily buy a house today from the money that investment would have made you.

While calculations like this should always be taken with a grain of salt – after all hindsight is golden, and nobody could have foreseen Apple’s bright future in 1997 – it’s still a fun way of illustrating the company’s rise over the past two decades and to show the potential of long-term investments, although choosing Apple to do so is admittedly the very definition of cherry picking. 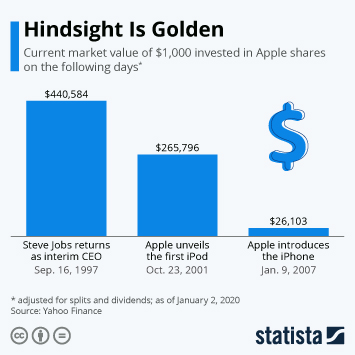 This chart shows the current market value of $1,000 invested in Apple shares at selected turning points in the company's history.