The Arctic, which includes Alaska, Finland, Greenland and other northern territories, is experiencing the most extreme rise in temperature over the last decades, according to NASA, growing about twice as fast as the rest of the world. That’s why Alaska, with a temperature change of 4.22 degrees since 1970, is the fastest-warming state in the U.S.

In data collected and averaged by the National Centers for Environmental Information, all 50 states have increased an average of 2.50 degrees Fahrenheit since 1970. The top 10 fastest-warming states are in the Southwest and Northeast, with Arizona, Delaware, New Jersey and Utah all warming by more than 3.00 degrees Fahrenheit on average since 1970. The fastest-warming cities are also in the Southwest and Northeast, including the top city, Las Vegas, with a temperature increase of 5.76 degrees since 1970. In fifth place, Burlington, Vermont, increased by 4.13 degrees.

According to the nonprofit news organization Climate Central, in most of the United States, winter is the fastest-warming season. Winters have warmed between four to five degrees Fahrenheit nationally since 1970, with clear trends showing warmer winters after each decade. 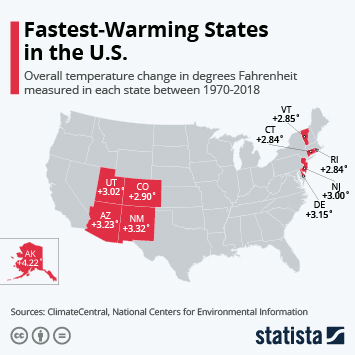 This chart shows the overall temperature change in degrees Fahrenheit measured in each state between 1970-2018.