Impact of the coronavirus pandemic on the global economy - Statistics & Facts

Published by Statista Research Department, Sep 13, 2022
While it is difficult to tell exactly what the economic damage from the global COVID-19 coronavirus pandemic has been, it has had severe negative impacts on the global economy. During 2020, the world's collective gross domestic product (GDP) fell by 3.4 percent. To put this number in perspective, global GDP reached 84.54 trillion U.S. dollars in 2020 – meaning that a 3.4 percent drop in economic growth results in over two trillion U.S. dollars of lost economic output. However, the global economy quickly recovered from the initial shock, reaching positive growth levels again in 2021. That year, it reached 92.3 trillion U.S. dollars and it is expected to continue to grow in the coming years, although Russia's war in Ukraine since February 2022 and its impact on the world's economy may hamper economic growth.
Global stock markets also suffered dramatic falls after the coronavirus outbreak, although they were able to recover from the losses quite quickly. The Dow Jones reported its largest-ever single day loss of almost 3,000 points on March 16, 2020 – beating its previous record of 2,300 points that was set only four days earlier.

The COVID-19 pandemic had a varied impact on different sectors and industries. As countries around the world closed their borders and imposed travel restrictions, especially the travel and tourism industry was heavily affected. The travel restrictions led to a sharp decrease in the number of flights worldwide. On the other hand, the internet trade boomed as an increasing number of people either chose or were forced to buy their non-essential goods online, as retailers were forced to close their shops during the pandemic. For instance, Amazon's net sales revenue reached new records both in 2020 and in 2021.

While the pandemic hit the whole global economy, some countries and regions were affected more than others. For instance, in the third quarter of 2020, China had a positive GDP growth rate of nearly five percent, whereas the United Kingdom's dropped by nearly eight. However, by the same quarter next year, it was increasing again by around seven percent. In Asia, the change in the GDP varied between 0.2 percent in East Asia to minus 7.7 percent in South Asia. The reasons behind this are manifold and complex, but the East Asian countries' relatively fast response to the pandemic in its early stages meant that they could ease restrictions quite fast as numbers were declining.

In response to he economic decline, several governments implemented stimulus packages to support the national economies and relieve unemployed people. Indeed, the global GDP has grown since the initial fall in 2020, and the GDPs of the G20 members are predicted to increase by 2026, underlining the positive effect of the stimulus packages as well as the easing of restrictions.

In the following 7 chapters, you will quickly find the 44 most important statistics relating to "Coronavirus: impact on the global economy".

The most important key figures provide you with a compact summary of the topic of "Coronavirus: impact on the global economy" and take you straight to the corresponding statistics. 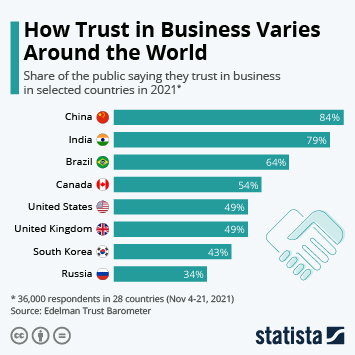 How Trust In Business Varies Around The World 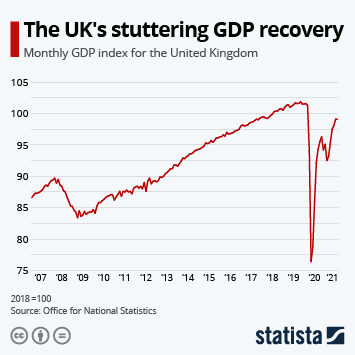