The U.S. stock market continued its latest upward trend on Monday, as hopes for a quick decision on President Biden’s $1.9 trillion stimulus plan carried all major indices to all-time highs. Following a remarkably good second half of 2020, the Dow Jones, S&P 500 and Nasdaq Composite Index are now up 69, 75 and 104 percent from their pandemic lows on March 23, 2020, raising doubts over what many consider a growing disconnect between markets and reality. After all, the pandemic continues to take a heavy toll on the U.S. economy, leaving 10+ million Americans unemployed and thousands of bars, restaurants and retail stores on the brink of collapse.

So is the stock market really overheated or are investors simply looking beyond present conditions, anticipating a strong recovery for 2021 and beyond?

One way of looking at stock valuations is the market value of all publicly traded companies as a percentage of GDP, which Warren Buffett described as “the best single measure of where valuations stand at any given moment” in a Fortune interview in 2001. “Two years ago the ratio rose to an unprecedented level,” Buffett said shortly after the tech bubble had burst. “That should have been a very strong warning signal.”

As the following chart shows, the ratio of market capitalizations (as measured here by the very broad Wilshire 5000 index) to GDP is significantly higher now than it was shortly before the dot-com bubble burst. Using quarterly average closes of the Wilshire 5000 Total Market Index and dividing it by quarterly GDP figures shows that the ratio is unprecedentedly high at the moment, which, following Buffett’s rationale, could be seen as an ominous sign of things to come. 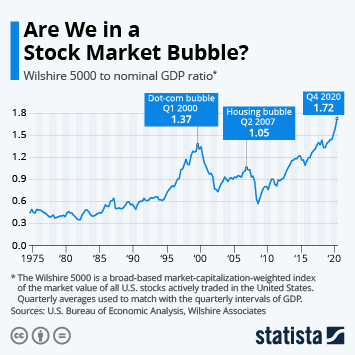 This chart shows the Wilshire 5000 to nominal GDP ratio as a measure of stock market valuations over time.