Protests continue over the police killings of Black Americans in the U.S. Two months after the death of George Floyd, The Marshall Project highlights which states have passed bills focused on police reform, introduced bills or chosen not to introduce bills over the last month.

According to The Marshall Project and data obtained through a database compiled by the National Conference of State Legislatures, Colorado, Iowa, New York and now Connecticut are the only states that have successfully passed legislation aimed at attacking systemic police racism through improved police oversight and accountability.

Bills passed in New York and Iowa addressed similar issues by banning chokeholds and overseeing officer misconduct more thoroughly. More power is given to the state attorney general to investigate wrongful killings by officers and to prevent officers from being rehired who had been convicted of a felony, fired for misconduct or quit to avoid a firing for misconduct. Both New York and Iowa, however, failed to go as far as Colorado in ending qualified immunity for police officers.

Several other states have proposed new bills or amendments to broaden police accountability and prevent wrongful killings, including Minnesota, where a Republican-controlled Senate has said they don’t plan to go as far with police reform measures as their Democratic counterparts in the House. Seven states, all with Republican-controlled state legislatures, have not yet proposed any police reform bills since George Floyd’s killing. 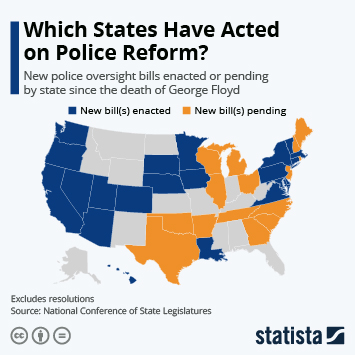 This chart shows police reform bills by state since the death of George Floyd.

Mass Protests in the U.S.