Instant Noodles have been in high demand during the coronavirus pandemic, but even before that the quick and cheap meal was a popular choice for many. According to the World Instant Noodles Association, demand reached 106 billion servings in 2019.

Around 40 percent of these instant noodle packets are cracked open in China, but looking at consumption per capita, South Korea is home to the biggest noodle lovers with more than 75 servings consumed by the average South Korean annually. Himalayan nation Nepal is in rank 2 with more than 58 packets consumed per person and year.

The home of the instant noodle is Japan, where the first “dehydrated ramen” packages hit markets in 1958 – a time when workers the world over were looking for meals that were cheap and prepared quickly to fit modernizing lifestyles. Today, the country consumes the fourth-most instant noodles in total and the seventh-most per capita.

The Asian continent certainly is on the forefront of instant noodle consumption regardless of the parameter, but other countries also love a noodle snack. The nations with the highest per-capita consumption outside of Asia are New Zealand and Australia – both home to sizable populations of Asian origin. The U.S. follows suit but is beat by Saudi Arabia. According to WINA, instant noodles were introduced there by domestic workers from Asia and grew popular among locals as well.

Brits are the biggest consumer in Europe behind Poland and the Ukraine. European nations known for their gourmet tastes are less likely to be instant noodle connoisseurs, however. Consumption is low in Italy, Spain and France, with French people only slurping down a single ramen packet per year on average. Out of the 52 countries with the highest overall consumption in the world, Argentina comes last with 10 million servings – or 0.2 per Argentinian – consumed annually. 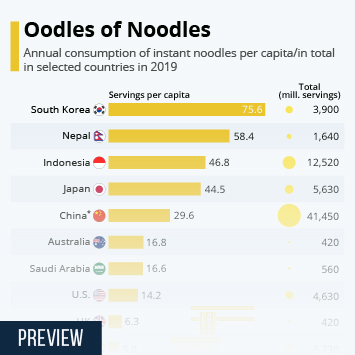 This chart shows instant noodle consumption per capita and in total in selected countries in 2019.