﻿The non-partisan U.S. Government Accountability Office (GAO) recently released an overview of mission capable rates and the cost of operating U.S. military aircraft. It examined more than 40 different aircraft types, finding that only three of them reached their mission capable goals between fiscal years 2011 and 2019. In total, the report put the collective cost of operating all of the U.S. military's aircraft fleets at $49 billion in fiscal year 2018, taking operational & support (O&S) costs such as maintenance as well as supply support in account. O&S generally makes up 70 percent of a weapon system's total life cycle costs and it includes spare parts, depot and field maintenance, contract services, engineering support and personnel, amongst other factors.

20 aircraft types experienced an increase in their O&S costs from fiscal year 2011 through 2018, 22 saw a decrease and three remained consistent. At $118 million, the Navy's KC-130T Hercules fleet had the lowest operating cost of all the military's fleets during the above period while the Air Force's KC-135T Stratotankers cost $4.24 billion to keep flying, the most of any aircraft type (primarily due to the fleet's size and age). Alongside those availability rates, the research also provides an interesting list of the cost of keeping some of America's leading combat aircraft operational in fiscal year 2018.

The Air Force's bombers are the most expensive aircraft in the U.S. inventory to keep operational, primarily due to their age and complexity. In fiscal year 2018, for example, the B-2 Spirit had operating costs per aircraft at close to $63 million, a figure that is high due to the extra work rquired to maintain that aircraft's low observability characteristics, such as its stealth coating. By comparison, the nearly 70-year old B-52 costs $25 million to keep mission-capable while the B-1B comes in at $23.7 million per aircraft. The high cost of maintaining stealth aircraft is also evident in the fighter fleet.

America's two most sophisticated combat aircraft - the F-22 Raptor and F-35 Lightning II - are also the most expensive fighter jets to maintain at $22 million and $13.4 million per aircraft in fiscal year 2018, respectively. The F-22 is demanding for its maintainers, requiring a three-week packaged maintenance plan for every 300 flight hours. Lessons learned with existing stealth aircraft such as the B-2, F-117 and F-22 were incorporated into the F-35's design to make maintenance easier and the introduction of a computerized program to handle any work that's required is just one example. Nevertheless, the F-35 is still more expensive to maintain than older U.S. fighter aircraft such as the F-15 and F-16 that both cost less than $10 million per year to keep in the air. 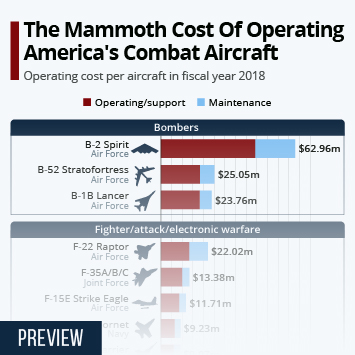 This chart shows the operating cost per aircraft in fiscal year 2018.