Glamor, swimsuits and – national interests? The world of international beauty pageants is intriguing and so is the list of countries that have the most titles to their names. While beauty and grace are surely important in determining who ends up with the title of Miss World, Miss Universe, Miss International or Miss Earth, it also important to note which countries give out the sought-after crowns and tiaras.

The two oldest women's pageants out of the so-called Big Four group are the Miss Universe and Miss World titles, organized by committees in the U.S. and the UK, respectively. Over the years – the pageants have been running since 1952 and 1951 – both countries have favored their homegrown beauty queens to some extent. The country which has received the most titles – eight - from the U.S.-based organization behind the Miss Universe pageant was the United States themselves. Yet, Venezuela and the Philippines made it to the top of the ranking with none – or just a little – help from a friendly organizing committee.

The Japan-based pageant Miss International is the exception to the rule and has only named one Japanese beauty queen since its inception in 1960. The fourth pageant in the group – Miss Earth – is based in the Philippines but has only been running since 2001 and has therefore not had a major influence on the country’s high position in the ranking. Out of 15 Filipina winners of major contests, only four won a Miss Earth title. The first Big Four winners from the Philippines were in fact chosen much earlier. Gemma Teresa Guerrero Cruz won Miss International in 1964 and Gloria Diaz was crowned Miss Universe in 1969, highlighting the long history of pageant success in the country.

Nations in close association with organizing countries have in the past been more likely to receive the respective title, as the examples of India (six Miss World titles), Jamaica (four Miss World titles), Gibraltar, Bermuda and Grenada (one Miss World title each) show. For the U.S.-based Miss Universe contest, Puerto Rico has received the most titles behind the United States and Venezuela. The Philippines-based committee in 2020 gave out a first title to long-time ally the United States, but might have regretted the decision, which caused the country to tie with the Philippines for second-most Big Four titles. The Miss World and Miss International titles for 2020 are still outstanding, however. The Mexican Andrea Meza won the Miss Universe 2020 crown on Sunday in a competition postponed due to the coronavirus pandemic, catapulting her country into a joint rank six of Big Four titles. 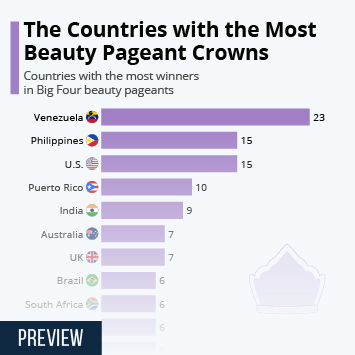 This chart shows the countries with the most Big Four international beauty pageant titles.