In a year that was marred by the coronavirus pandemic, Filipino overseas workers still managed to roughly achieve last year’s level of personal remittances. The preliminary figures released by the Central Bank of the Philippines on Sunday showed that remittances were 0.8 percent lower than in 2019, standing at US$33.2 billion. The sum made up 9.2 percent of GDP, according to the release.

In the previous six years, annual remittance growth had been at least 3 percent and even reached 7.5 percent in 2014.

The worst months for Filipino overseas workers were April and May, when the first wave of COVID-19 infections rocked the world and workers had to be repatriated in droves. According to the Department of Foreign Affairs, more than 327,000 were flown home in all of 2020, almost a third of them being sea-based workers. Remittances earned in April and May decreased by around 16 percent and 19 percent, respectively, compared to the same months in the previous year. January, June, July and September were the months when workers could up their earnings compared with 2019 to balance out the ample coronavirus losses.

According to the Central Bank, the U.S. was the origin of the highest share of total remittances even though its role is inflated by cash remittances merely routed through U.S.-based financial institutions. Following the U.S. as the biggest sources of personal remittances are Singapore, Saudi Arabia, Japan, the UK, the United Arab Emirates, Canada, Hong Kong, Qatar and South Korea.

The fact that some Asian nations kept the coronavirus mostly in check and their economies mostly open during the crisis year also benefited overseas workers. Singapore, Hong Kong, South Korea and Taiwan were among the places from which remittance payments increased in 2020, while those from Saudi Arabia, Japan, the UK, the United Arab Emirates, Germany and Kuwait declined. 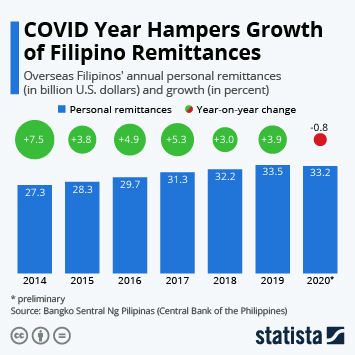 Cost of the Internet