In data collected by the Centers for Disease Control and Prevention, as of March 8, New Mexico leads the country with a significant 26 percent of its population with at least one COVID-19 vaccine dose. Following closely behind is Alaska with nearly 25 percent, with South Dakota, North Dakota and Connecticut rounding out the top five with each at around 23 percent.

Currently, the national percentage of people with one vaccine dose is roughly 18 percent, and these next five states are currently lagging behind with the lowest percentage of one-dose vaccinations in the country. Alabama, Georgia, Texas, Washington D.C. and Utah still fill out the bottom states with around 14-15 percent of their populations given at least one vaccine dose so far.

Still, there’s no question vaccine distribution and shots given are ramping up in every part of the country. A majority of people trust the vaccine and are eager to get their recommended two shots as soon as possible. Recent surveys, however, show a substantial portion of the country is still hesitant – a fact that could make herd immunity difficult later in the year.

Johnson & Johnson and the CDC recently released news that their one-shot vaccine offers strong protection against COVID-19, which could further increase vaccination speeds as the country enters spring. 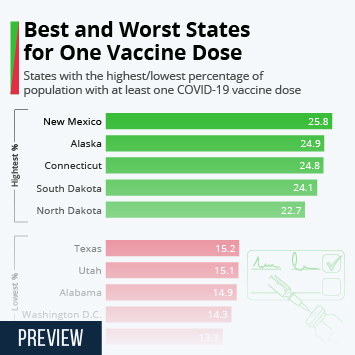 This chart shows the states with the highest/lowest percentage of their population with at least one COVID-19 vaccine dose.