Coronavirus (COVID-19): the search for vaccines and treatments

Published by Matej Mikulic, Jun 2, 2020
As of June 2nd, 2020, there had been over 6.4 million cases of the coronavirus disease (COVID-19) worldwide. The spread of the virus has led to governments implementing strict isolation measures, and some national health systems are carrying an unbearable burden. The level of uncertainty looks set to remain because nobody knows if new waves of the infection will arrive as quarantine measures start to relax. However, there are signs of positive developments in the search for the first vaccine and potential treatments.
Finding a safe and effective vaccine is a public health priority. As the infection spreads and cases increase, pharmaceutical and biotech manufacturers are trying to develop vaccines and antivirals, arranging clinical trials to test drugs that could potentially prevent or treat the disease. To be the first company producing a vaccine against the new disease is a matter of prestige and even more of potentially high profits. Not only the established big pharma companies, but also small innovative biotech firms are racing to create a vaccine against the new coronavirus. Several such companies have already increased their market capitalization as a result of being involved in research on SARS-CoV-2 (severe acute respiratory syndrome coronavirus 2 - the virus that causes the COVID-19 disease).

One of the most discussed vaccines in development is named mRNA-1273, which has been developed by biotech company Moderna in partnership with the National Institute of Allergy and Infectious Diseases (NIAID). Considering how slow drug development can take, the new vaccine was ready in record time, far quicker than drugs manufactured during previous pandemics. It has been made possible by significant scientific advances in recent years, but also by Chinese scientists, who promptly shared the genetic sequence of SARS-CoV-2. Understanding the sequence allows research groups to study how the virus invades human cells and makes people sick.

The mRNA-1273 vaccine has shown promise in animal models, and healthy adult volunteers in Seattle were the first humans to receive a dose of the vaccine in the United States. The urgent situation means that regulators have started to grant emergency approval for the testing of some vaccines and treatments. After Moderna, CanSino Biologics from China was the second company which started running clinical tests in healthy volunteers. As of today, several other companies started running clinical trials, while many more are preparing them. In general, three types of vaccines are in trial: vector-based vaccines, gene-based vaccines, and inactived vaccines.

However, as of end-May 2020, it looks like Chinese efforts to get the first vaccine are the most promising. CanSino Biologics is the first company to publish its full phase I clinical trial results in a peer-reviewed paper and is now advancing to clinical phase II with 500 adult volunteers. In the meantime, Moderna has still to provide the complete data on phase I in a peer-reviewed journal. On the other hand, a team at the Oxford University (now partnered by AstraZeneca) – probably the most prominent candidate – received a certain setback: while vaccinated monkeys became protected from the disease, they were still infectious and could spread the virus.

Besides finding a vaccine to prevent the COVID-19 disease, the focus is on finding drugs to treat already infected persons. The drug that has gained the most attention for fighting SARS-CoV-2 is remdesivir, which was originally developed by American biotech firm Gilead Sciences for use against Ebola. The University of Nebraska Medical Center was among the first to begin testing remdesivir to evaluate its safety and efficacy in COVID-19 patients. The first volunteer for a trial was an American who was repatriated after being quarantined on the Diamond Princess cruise ship. As of mid-April, results of a study with 125 COVID-19 patients in Chicago were leaked, highlighting the promise of remdesivir: almost all of the patients with severe symptoms (113) were able to leave the hospital within a week. However, a study from China comparing 158 patients with remdesivir and 79 with a placebo showed no significant improvement for COVID-19 patients. In another switch of events, the NIAID published results from another study which were said to prove that remdesivir led to a quickened hospital discharge among COVID-19 patients. Following that, the FDA approved an EUA for remdesivir, as of May 1st, although it looks like the drug is effective only in a certain group of not too severely ill COVID-19 patients.

Related to the whole issue is the effort to manufacture quick-analyzing COVID-19 diagnostics. Knowing who is already infected by the virus is a crucial step in controlling and containing its spread. By flattening the trajectory of the pandemic, on the other hand, biopharma companies gain much-needed time to produce a safe and effective vaccine. However, none of the used tests – especially the quick ones – are 100 percent accurate. Results can be affected by the design of the test, the time of testing, and the location of the virus.

In the following 6 chapters, you will quickly find the 37 most important statistics relating to "Coronavirus (COVID-19) vaccines and treatments".

Before the pandemic: pharma

Before the pandemic: medtech

The most important key figures provide you with a compact summary of the topic of "Coronavirus (COVID-19) vaccines and treatments" and take you straight to the corresponding statistics.

COVID-19: Impact on the global economy 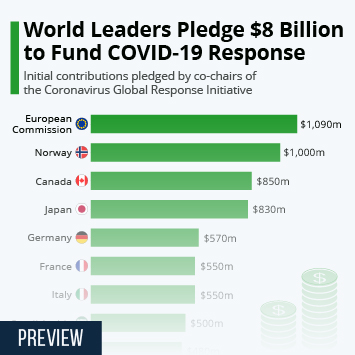