Despite the unprecedented surge in Covid-19 infections driven by the Omicron variant, U.S. airports have been staying relatively busy. While the number of TSA safety checks performed at U.S. airports over the past week trails January 2019, i.e. pre-pandemic levels by roughly 25 percent, passenger throughput remains twice as high as it was during the same period of last year when cases hit their pre-Omicron peak at roughly one third of current infections.

Following an abysmal 2020, where passengers remained hesitant to return to the skies, flight traffic picked up noticeably in the second quarter of 2021, as the vaccine rollout proceeded rapidly. According to data from the Transport Security Administration, passenger throughput at U.S. airports started climbing steadily, with TSA safety checks exceeding two million in a single day for the first time since the pandemic hit on June 11. Throughout the busy summer season, the daily average hovered around the two million mark, trailing 2019 passenger numbers by roughly 500,000 a day on average. By early December, that gap had narrowed to 350,000-400,000 and it remained in that range for most of the holiday season and in early January 2022.

Prior to the pandemic, daily passenger volumes of 2+ million were the norm rather than the exception. At the onset of the pandemic, daily passenger throughput fell as low as 100,000 in April 2020, before slowly climbing back to its current level. Throughout 2021, the TSA performed an average of 1.59 million safety checks per day, compared to 880,000 in 2020 and 2.31 million in 2019. 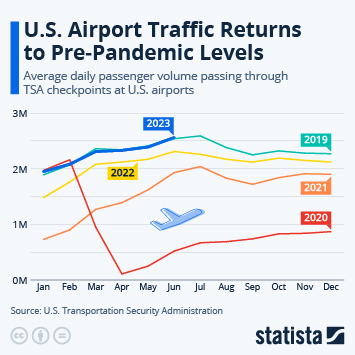 This chart shows the seven-day average of travelers passing through TSA checkpoints at U.S. airports.