40k
57k
41k
9.6k
In April 2017, a United Airlines passenger was forcibly removed from a fully-boarded domestic flight, getting injured in the process. The incident was caught on video and quickly went viral, resulting in widespread criticism of United Airlines and a fall in the company's share price. It also brought the industry's practice of bumping passengers to light in order to accommodate deadheading airline employees who need to get to different destinations. With Thanksgiving, Christmas and America's peak travel season swiftly approaching, has the United incident led to a fall in bumping passengers and which airlines are most likely to carry it out?

Website Upgraded Points recently analyzed U.S. Department of Transportation data, finding that bumping rates did indeed fall swiftly after the nasty incident on the United Airlines plane. In the second half of 2016, it was at an all-time high of 6.93 passengers per 100,000 and that fell to 2.08 per 100,000 in the third quarter of 2017. Since then, it has risen slightly and it stood at 3.06 involuntary denied boardings per 100,000 passengers in the second quarter of 2019, making it quite rare for any American to actually experience it.

Despite that, the analysis found that Frontier Airlines had the highest bumping rate last year at 6.28 instances per 100,000 passengers. Spirit came second with 5.57 while Alaska was further back in third place with 2.30. United Airlines has certainly learned its lesson since the incident occurred with its bumping rate falling to just 0.09 instances per 100,000 of its passengers. 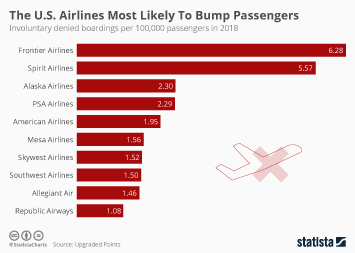 This chart shows involuntary denied boardings per 100,000 passengers in 2018.