Israel's quick and effective vaccine rollout has successfully suppressed the spread of Covid-19 with the number of daily new infections continuing to drop despite the economy reopening. New cases peaked on January 27 at 11,934 according to Our World in Data and they have trended firmly downward since then with vaccines quickly breaking the country's third wave. The end of the pandemic now looks to be in sight for Israel's nine million inhabitants.

The authorities are still urging caution, however, due to the possible emergence and spread of new Covid-19 variants that are more resistant to vaccines or more lethal. A study published in Israel last week found that the South African variant of the virus may be able to evade some of the protection provided by the Pfizer-BioNTech shot. While that is a potentially worrying development for Israel considering that it has been primarily using that particular vaccine, Dr. Fauci in the US has labeled the study misleading, stating that vaccines still remain effective at preventing serious illness and death.

Daily life has been returning to some kind of pre-pandemic normality in Israel in recent weeks but there are constant reminders that the crisis isn't quite over yet such as rules mandating mask wearing indoors and outdoors. It has been reported that the outdoor mask mandate will be lifted next week by the Ministry of Health nearly a year to the day since its implementation.

Fully vaccinated Israelis are already able to enjoy a range of amenities such as gymns, swimming pools and concerts through an app-based green pass that provides proof of inoculation. The successful vaccine campaign started on December 19th and its sheer speed, coupled with low levels of vaccine hesitancy, swiftly ended the country's third wave. 60 percent of the population had received one jab by March 23rd and the share fully vaccinated hit 57 percent by April 11th.

As positive as the situation looks for Israelis at the moment, the country's government has been critized for its failure to vaccinate millions of Palestinians living under its military control. It has been reported that 100,000 Palestinians who enter Israel or work in Jewish settlements in the West Bank have received the jab while around 5,000 doses have been donated. So far, the Palestinian Health Authority has been largely reliant on COVAX and donations from wealthy Arab states like the UAE for vaccines.

At the start of this year, the United Nations released a statement saying that Israel is responsble for swift and equitable access to Covid-19 vaccines for the Palestinian population, as it is the occupying power. Given that Israel is close to the end of its vaccine campaign, it will be interesting to see if its leftover doses will be distributed to Gaza and the West Bank. 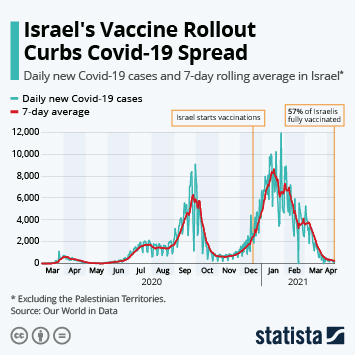