There are masks for virtually any price range, for nearly every imaginable skin type or condition. A face mask can come in the form of a sheet soaked in a serum that is then rubbed into the skin or a liquid or clay that is applied to the face before being rinsed or peeled off after a certain amount of time. Although they have been around for decades, the market value for face masks worldwide has been steadily increasing and is expected to grow from about 32.76 billion U.S. dollars in 2018 to nearly 51 billion dollars in 2025. The vast majority of this market value can be attributed to the Asia Pacific region, where face masks are extremely popular compared to the rest of the world.
Sheet masks are most often associated with Korean skincare but in recent years they have shown up in more and more American drug stores and cosmetic stores. In 2018 it was estimated that the market value of sheet masks worldwide was around 283 million U.S. dollars, a figure that is expected to nearly double by 2026. Between 2016 and mid-2017, about 40 percent of sheet mask launches occurred in South Korea, while only two percent of sheet mask launches were from American companies, showing that the U.S. market has a lot of catching up to do in order to rival the South Korean market.

In the United States, the market value of face masks doubled in value between 2002 and 2017, from 100 million U.S. dollars to about 200 million dollars. Although there are countless U.S. companies that produce face masks, the three leading American face mask brands are Mary Kay, SK-II and Neutrogena. A December 2017 survey found that 42 percent of American women prefer facial masks that contain clay, making it the most popular ingredient for facial masks followed by apple cider vinegar and probiotics.

Although the staples have maintained their popular status, there are always new and exciting face masks entering the market and drumming up interest in the online beauty community. Between 2015 and 2016 the Google search engine queries about “carbonated clay mask[s]” had grown in volume by over 5000 percent, pointing to a significant amount of buzz surrounding that product.
This text provides general information. Statista assumes no liability for the information given being complete or correct. Due to varying update cycles, statistics can display more up-to-date data than referenced in the text.
Published by Statista Research Department, Feb 16, 2022

Global distribution of facial masks market launch by region in 2017

Interest in sheet face masks and lip masks in the U.S. 2021 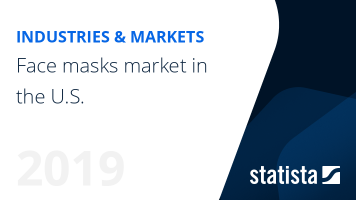 The most important key figures provide you with a compact summary of the topic of "U.S. face masks market" and take you straight to the corresponding statistics.