After years of fighting for a chance to reap the rewards of their athletic achievements, U.S. college athletes landed a big win this week. The National Collegiate Athletic Association (NCAA) gave in to pressure from state legislators in adopting a new policy that will allow college athletes to engage in name, image and likeness (NIL) activities, enabling them to sign sponsorship deals potentially worth millions of dollars.

The new rule that took effect on July 1, is considered an interim fix on the road to a permanent solution that the NCAA vowed to work on with Congress. The organization also pointed out that the change in NIL policy does not affect its commitment to the rules regarding pay-for-play and improper inducements tied to choosing to attend a particular school. Those rules will remain in effect as the NCAA considers them “key principles of fairness and integrity across the NCAA.”

In the United States, college sports – especially American football and Basketball – play a much larger role than in other countries, almost level with professional sports. Universities collectively generate billions of dollars from TV deals, sponsorships and ticket sales with total revenue generated by NCAA athletic departments in 2019 adding up to $18.9 billion. In many cases, football and basketball coaches get paid millions of dollars a year, all while athletes are forced to maintain “amateur status”.

Prior to this week’s rule change, college athletes were only allowed to accept scholarships covering the cost of attending university. Including tuition, room, board and books that usually amounts to a couple of ten thousand dollars. The newly adopted NIL policy will enable top athletes to make many times that, especially in the age of social media, when endorsement deals often exceed athlete salaries. 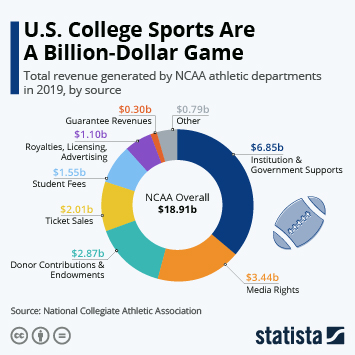 This chart shows total revenue generated by NCAA athletic departments in 2019, by source.

Professional Sports During the COVID-19 Pandemic