What sets the current crisis apart from past crises, economic or otherwise, is the fact that it not only leaves people deeply concerned for their health and economic wellbeing, but it has also taken away most of the things that typically offer some much-needed distraction from these concerns. No bar open for a drink after a long day of work, no movie theater to flee reality for two hours. Most importantly though for millions of Americans: no professional sports.

Like most public life, the sporting world has hit the pause button with major sports leagues and events either suspended, cancelled, or postponed. To those hoping for professional sports to return in their full glory (i.e. in front of packed crowds) over the summer, Dr. Anthony Fauci, America’s most prominent infectious disease expert, had bad news this week. In an interview with Snapchat’s Peter Hamby, he said that the only way pro sports could return anytime soon would be without spectators.

"There's a way of doing that," Fauci told Hamby when asked about the MLB and NFL specifically, "nobody comes to the stadium. Put [the players] in big hotels, wherever you want to play, keep them very well surveilled. ... Have them tested every single week and make sure they don't wind up infecting each other or their family, and just let them play the season out."

Fauci’s remarks come a week after a Seton Hall Sports Poll showed that most Americans wouldn’t feel safe attending a stadium before a vaccine for the coronavirus is developed anyway. 72 percent of respondents in the poll conducted April 6-8 said they wouldn’t feel safe at all attending a stadium, regardless of potential social distancing measures. As the following chart shows, 40 percent of the respondents don’t expect professional sports to make a comeback this year at all, while another 21 percent think it will only happen behind closed doors. 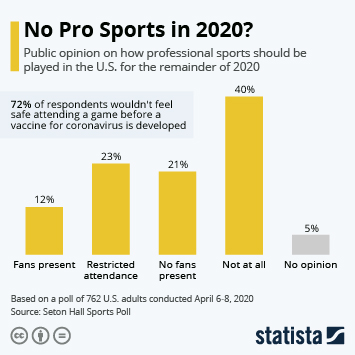 This chart shows the results of a poll about if and how professional sports should return in 2020.