In one of the more stunning examples of corporate flip-flopping in recent memory, OnlyFans pulled out of its planned pornography ban on Wednesday. Just last week, the platform predominantly known for letting sex workers charge fans for exclusive and often explicit content had announced a policy change prohibiting “the posting of any content containing sexually-explicit conduct.”

“In order to ensure the long-term sustainability of the platform, and to continue to host an inclusive community of creators and fans, we must evolve our content guidelines,” the official announcement of the policy change said, even though it later emerged that the company had been pressured into banning sexually explicit content by banks and payment providers. “The change in policy, we had no choice — the short answer is banks,” the company’s founder and CEO Tim Stokely told the Financial Times.

Meanwhile Axios reported that OnlyFans also struggled to attract investors due to its reputation for adult content. Judging by its numbers alone, the company should be a showpiece unicorn, struggling to duck away from the money thrown at it. According to the company’s own projections, which Axios obtained from a pitch deck in March 2021, OnlyFans expected gross merchandise value to grow from $2.2 billion in 2020 to $12.5 billion next year, with net revenue also expected to increase more than five-fold to $2.5 billion by 2022.

Of course, these projections would have been obsolete if OnlyFans had really enforced the planned policy changes, which is why Wednesday’s reversal doesn’t come as a complete surprise. “Thank you to everyone for making your voices heard,” the company tweeted. “We have secured assurances necessary to support our diverse creator community and have suspended the planned October 1 policy change. OnlyFans stands for inclusion and we will continue to provide a home for all creators.”

Founded in 2016, OnlyFans has 150 million registered users. The company claims to pay out more than $5 billion to its 1.5 million content creators annually. 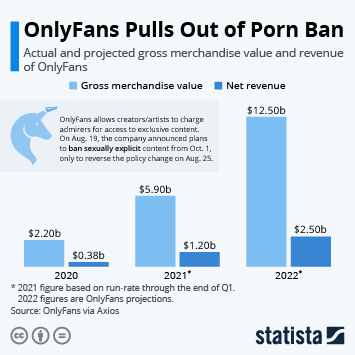