GAFAM, short for Google, Apple, Facebook, Amazon and Microsoft, are not only commercial tech giants, but also some of the most active contributors to open source projects on GitHub. As our chart indicates, not even open source veterans can hold a candle to the contributions of some of the biggest tech firms of the world.

According to the Open Source Index, 5,709 employees of Google filed more than ten commits, actions similar to saving a file or making a change in an online document, on the free online code repository in 2020. The tech giant also showed the biggest growth in this regard with more than a thousand additional contributors compared to 2019. This comes as no surprise, since open source is embedded in Google's DNA. Its mobile operating system Android, for example, is built on open source code. Out of the original wave of successful open source software companies, only Red Hat managed to crack the top 8 with 3,127 contributors. In 2018, the software developer responsible for the enterprise operating system Red Hat Enterprise Linux was acquired for the sum of 34 billion U.S. dollars by IBM, which comes in at fourth place just after Red Hat.

Open source software has been a backbone of software development since the 80s, while the term itself was coined in 1998. In recent years, it has also become a valuable business, with many companies like Red Hat, MongoDB and Elastic being valuated in the double-digit billion figures and tech companies like Apple, Google and Amazon offering open source knowledge bases and encourage their employees to contribute to adjacent projects in their spare time. To raise awareness for the open source software movement, Software Freedom Day is celebrated every year in September. 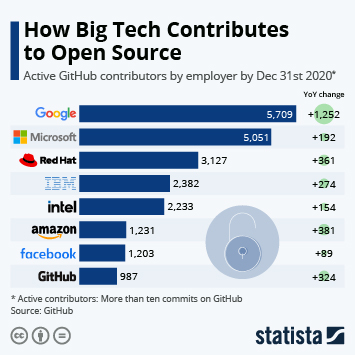 The chart shows the active GitHub contributors by employer.