In 2021 alone, climate tech companies have received around $37 billion in venture capital funding, an increase of 88 percent compared to 2018. Tech leaders Amazon, Google and Microsoft have also contributed to achieving carbon neutrality with technological innovation. As our chart based on data from HolonIQ and CB Insights shows, the ramp-up in funding by Big Tech has been comparably slow.

In 2018, investments by Amazon, Google, Microsoft and their subsidiaries only made up $100 million of the overall funding amount of $19.1 billion, which equals less than one percent. This is especially noteworthy since the internet's carbon footprint is estimated to amount between two and six percent of the total global CO² emissions per year, a figure similar to international aviation, and the three tech leaders accumulated a net income of $57 billion in 2018. Lately, Big Tech has increased its investments in companies and startups working on solutions to reduce greenhouse gas emissions.

Now, Amazon, Google and Microsoft are responsible for around a quarter of all climate tech funding. Amazon in particular recently invested heavily in the transportation sector, pouring billions of U.S. dollars into carmaker Rivian, battery recycling company Redwood Materials and Beta, a company focused on producing battery-powered vertical take-off and landing (VTOL) aircraft, via their Climate Pledge fund. While technological innovation can be one tool to combat rising greenhouse gas emissions, it can also lead to shifting problems from one sector to another. In the case of e-mobility, for example, potential issues like storage of dead batteries or the impact of the increased need for rare earths need to be taken into consideration.

According to the high-growth company analysts at Dealroom, the majority of 2021 and Q1 2022 impact funding went towards the UN's Sustainable Development Goals Climate Action ($44 billion) and Affordable and Clean Energy ($25 billion). Still, impact startups only make up a minority of the companies funded by venture capital. In Europe, 15 percent of VC funding went towards impact companies, with Asia and North America coming in second and third with nine and eight percent, respectively. 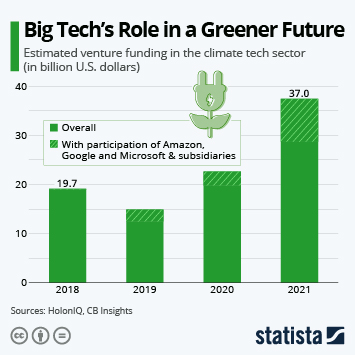 This chart shows the estimated venture funding in the climate tech sector.