On today’s International Day of Education, UNICEF said in a statement that the loss of learning due to the Covid-19 pandemic was “nearly insurmountable”. Even as the last extensive school closures around the world ended in recent months, many students did not return after long hiatuses because they took up work, were married or started families or because schools had gone broke or the teaching staff had left.

UNICEF estimates that share of children in low- and middle-income countries that doesn’t learn how to read by the age of ten will shoot up to 70 percent from around 50 percent. Partial school closures meanwhile persist in some countries around the world, mainly poorer ones where schools were already closed longer than in developed countries. Together with less effective remote learning caused by fewer resources, UNICEF finds that the pandemic has exacerbated the inequality in global education.

Uganda is the countries where the longest school closure occurred during the pandemic. Schools were shuttered 83 weeks between February 16, 2020 and October 31, 2021, and have since started to partially reopen. The new term officially started on January 10, but as reporting from the Guardian shows, complications included schools or their grounds having been repurposed, zero student turnouts and lack of faith in the return of in-person teaching.

School closures in India and Nepal also ranked among the longest in the world as of Oct 31, 2021, but full closures were shorter in these countries. The world record for the longest full closure as of that date was held by Bangladesh at 63 weeks. Another Asian country which experienced long school closures is the Philippines, where education institutions had remained fully closed for 60 weeks as October 31. Schooling has since resumed 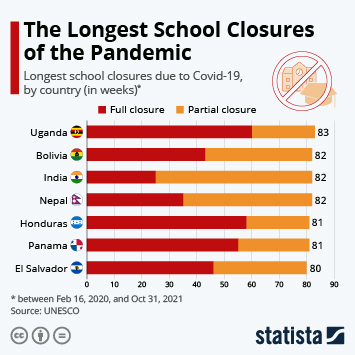 This chart shows the longest school closures due to Covid-19, by country (in weeks).