Since Russia annexed Crimea and Sevastopol from Ukraine in 2014, military conflict between the self-declared Donetsk and Luhansk Republics, supported by Russia, and the Ukrainian government have held the East of the country in a state of crisis. As the UN's Office for the Coordination of Humanitarian Affairs (OCHA) summarized in a February 2021 report: "The continuing conflict and the prevailing absence of a political solution have taken a heavy toll on the lives of millions of ordinary Ukrainians living on both sides of the “contact line”. It has also severed previously interdependent networks of services and markets and cut people off from the cities upon which they depended for social benefits and essential services."

In 2021, the OCHA estimated that 3.4 million people in the 'conflict-affected areas" were in need of humanitarian assistance - representing 8 percent of the total Ukraine population. Although this is a significant reduction from the 2015 figure of 5 million, the crisis is far from over. With the growing threat of a Russian invasion, the risk of it turning into a flat-out catastrophe has rarely been larger. Russia is believed to have vastly increased its military presence on the Ukrainian border in recent weeks, with troop levels now estimated to exceed 100,000.

If, and to what extent, this situation will escalate is still unclear and, in what some commentators have likened to the levels of denial represented in the Netflix drama 'Don't Look Up', Ukraine President Zelenskiy has been eager to play down the immediate risk posed by the military build-up: “We are looking up. We do understand what is happening. But we have been in the situation for eight years. We should not only be looking up but also at the ground...The threat is constant.” Zelenskiy said in a briefing to foreign media organizations, adding: “We can’t say the war will happen tomorrow or by the end of February. Yes, it may happen, unfortunately. But you have to feel the pulse on a day-to-day basis.”

Russia continues to deny it is planning an invasion, but has been very clear in voicing the Kremlin's outright opposition to a further eastward expansion of NATO - something which the organization has refused to rule out, and with the Ukraine openly aspiring to membership of the alliance. Diplomatic efforts have so far failed to resolve the crisis. In the meantime, the OCHA's humanitarian partners "aim to assist 1.8 million people (in 2022), with a funding requirement of $190 million", focusing on "saving lives, ensuring access to basic services, and strengthening the protection of those affected by the conflict and Covid-19." 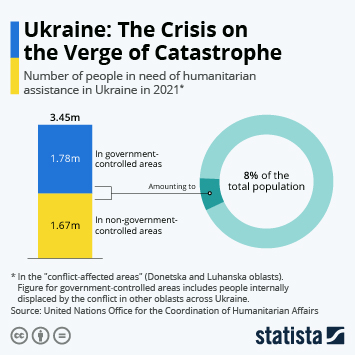 This chart shows the number of people in need of humanitarian assistance in Ukraine in 2021.