Three out of four U.S. Americans who actively follow sports are fans of American Football and cheer for their teams from their couches, stadium seats or barstools. As data from our Statista Global Consumer Survey shows, this fascination with the most lucrative sports league in the world doesn't extend beyond the reach of season tickets or the TV remote for most respondents though.

When people who actively exercise or participate in sports were asked about which athletic endeavor they at least occasionally dabble in, only 22 percent answered with American Football. Overall, the sport places eighth concerning this particular question, with hiking and fitness, aerobics and cardio coming in first and second at 38 and 35 percent, respectively. Basketball, on the other hand, ranks fourth with 26 percent actively participating in the sport.

It also managed to supplant baseball from second place concerning passive involvement. While only half of all respondents claimed to be following "America's favorite pastime", 56 percent said their actively interested in basketball and the NBA, whose stars like Giannis Antetokounmpo, LeBron James or Kevin Durant made the league around $9 billion in the 2018-2019 season.

The NHL, which is currently in its first round of playoffs and is arguably more popular with Canadians than with U.S. Americans, is only followed by 22 percent of people who consider themselves fans of sports leagues or teams.

Collectively, the four big U.S. leagues NFL, NBA, MLB and NHL made an estimated $40 billion in their seasons ending in 2019, earning them four out of five spots in the ranking of the leagues with the highest revenue in the world. The only non-U.S. league in the top 5 is the English Premier League, which brought in about €6 billion in 2019. 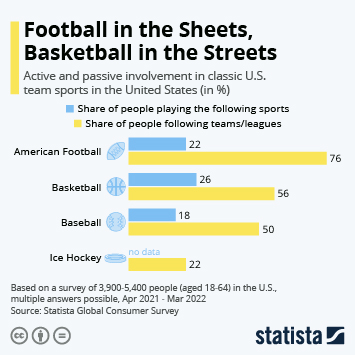 This chart shows the active and passive involvement in classic U.S. team sports in the United States.

Professional Sports During the COVID-19 Pandemic