Exactly 27 years after Amazon was incorporated on July 5, 1994, the company's founder Jeff Bezos stepped back from his role as CEO in July 2021, assuming the role of Executive Chair instead. Bezos, whose stake in Amazon made him the richest man alive, was succeeded by Andy Jassy, long-time CEO of Amazon Web Services, the company's highly successful cloud arm. "When you look at our financial results, what you’re actually seeing are the long-run cumulative results of invention," Bezos said in the announcement of his step-down. "Right now I see Amazon at its most inventive ever, making it an optimal time for this transition."

More than a quarter-century ago, on July 16, 1995, an unheard-of company from Seattle launched a website immodestly claiming to be "earth's biggest bookstore". While that may have sounded a little presumptuous back then, two and half decades later said company, Amazon, is not only the biggest bookstore on earth but arguably the biggest store, period.

If there is one thing that Bezos has been (in)famous for during his time at the helm, it’s his relentless focus on long-term growth. Having ignored critics for years, Bezos’ willingness to sacrifice short-term profits for long-term growth has paid off big time, turning Amazon into a trillion-dollar company and making him the wealthiest man on the planet.

Under Bezos' leadership, Amazon has cemented its position as the leading online retailer in large parts of the world, built an industry-leading cloud computing business, and established itself as a major player in digital media and consumer technology. The company has achieved all that by rigorously re-investing most of the money it makes, until eventually the profits became too large to spend. If Amazon's financial results really are "the long-run cumulative results of invention", there must have been some good inventions along the way. 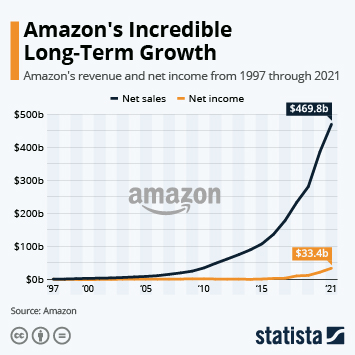 This chart shows Amazon's revenue and profit growth since 1997.