88.9k
International diplomatic conventions, such as the recently concluded 52nd Munich Security Conference, suggest that national governments are still the prime stakeholders in matters of world security, deciders of war and peace. This however belies the fact that the private sector too is deeply involved in all facets of conflict and security, and looking back in history, always has been.

For some observers, those who have professionalized their involvement in conflict for monetary gain, so-called Private Military and Security Companies (PMSCs), constitute nothing more than modern day corporate mercenaries. For others they simply are resourceful service providers specialized to operate in areas of conflict, who can step in when governments need additional support.

PMSCs take on security related tasks, not just for state actors but also inter-governmental (such as the UN, NATO and EU) and non-governmental organizations (NGOs). Support for front-line combat operations isn’t their main source of revenue. The majority of their services consist of logistics support, maintenance and the protection of facilities and employees.

The United States is the world's largest consumer of private military and security services. The degree of reliance on PMSCs by the U.S. government took on new dimensions during the War on Terror. However, it was the U.S.’ involvement in peace enforcement and keeping missions in the Balkans, when for the first time private contractors equaled the numbers of military personnel involved.

“By any measure, the dawn of the U.S. military’s inordinate dependence on contractor-provided services for contingency operations was observed during these nascent years of the 1990s” a report by the Naval Postgraduate School concludes. This had to do with substantial reductions in logistical capabilities and caps on troop sizes after the end of the Cold War.

The recent US-led wars in Afghanistan and Iraq have tightened collaboration between the public and the private sector in military and security affairs. Afghanistan is the first war in which the number of private contractors even overtook the number of military personnel employed.

Transparency International has taken a focus on PMSCs and come to the conclusion that while the sector is booming, the industry still lacks transparency and oversight. Hard facts and information are therefore notoriously hard to get by and are being served in small portions.

Industry regulation first became a hot topic after the killing of 17 civilians by Blackwater employees in Nisour Square in Baghdad in 2007, which attracted huge media and political attention. Since then, some efforts have been made to establish industry-wide standards and regulations.

The International Code of Conduct for Private Security Providers’ Association (ICoCA) was set up as a multi-stakeholder initiative. Also, the Montreux Agreement was adopted in 2008, which sets out to make international humanitarian law applicable to private security companies in conflict zones. 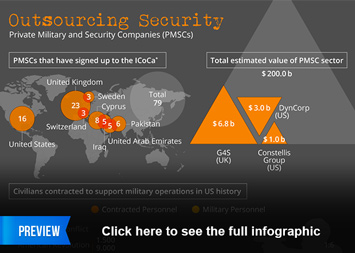 A glance at the Private Military and Security Companys (PMSCs) sector