53k
74.6k
87k
88.9k
When Apple released its results for the December quarter on January 23, the initial reaction of analysts, industry pundits and investors was overwhelmingly negative. The fact that the company had narrowly missed some of the goals set by Wall Street analysts, was widely considered final proof that Apple's best days are behind it and, to quote one of the more extreme conclusions, that Apple is doomed. As a consequence, Apple's stock plummeted, shaving tens of billions off the company's market cap.

What most of the stories on Apple's demise overlooked, or chose to ignore, was the fact that the company had just delivered record revenue and one of the highest quarterly profits ever to be reported by any company - ever. CEO Tim Cook later pointed out to Apple's employees, that he felt his company was unjustly assessed by Wall Street and that "the only companies that report better quarters pump oil".

Historically, Tim Cook was right on that point: the only companies that ever reported a quarterly profit higher than Apple's $13.1 billion are ExxonMobil and the Russian energy giant Gazprom, who reported net profit of $16.2 billion in the first quarter of 2011.
Looking at the short term though, even oil companies fail to deliver better quarters than Apple. In the December quarter, Apple earned $3 billion more than ExxonMobil, and at least $5 billion more than any other company in the United States. That includes oil companies such as Chevron, pharmaceutical companies such as Pfizer and financial institutions such as JPMorgan Chase.

So even though Apple is starting to show signs of an inevitable slowdown, the company remains incredibly profitable and, to borrow from the great Mark Twain, the reports of Apple's death are greatly exaggerated. 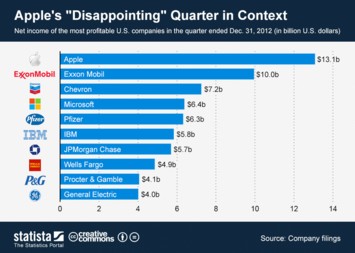 This chart shows the net income of America's most profitable companies in the quarter ended December 31, 2012.