88.9k
This year, the deadline for U.S. citizens to file their tax returns was moved back two days to April 17, because the usual April 15 deadline was Saturday, and Monday was a holiday in Washington. According to a report by the Associated Press, the people in in the District of Columbia paid most in federal taxes by a big margin compared to people in the 50 states.

On average, a person living in D.C. paid $36,600 in federal income, payroll and estate taxes in 2016. This said, Washington's rate of return is higher than anywhere else in America too. According to a survey by the New York state comptroller 2015, for every dollar the district pays in taxes it gets an average of $4 back from the federal government - most being spent on government employees' salaries.

On national average, the federal government spends $1.22 for every tax dollar it receives, which helps to explain why the government is running a budget deficit.

As the tax day deadline was pushed back two days, instead of filing their papers, many Americans took to the streets on Saturday to protest President Donald Trump's refusal to release his tax returns. This has been customary among his predecessors for 40 years, since Richard Nixon was in office.

At a press conference in November 1973 Nixon famously said: "I welcome this kind of examination. People have got to know whether or not their president is a crook. Well, I am not a crook." 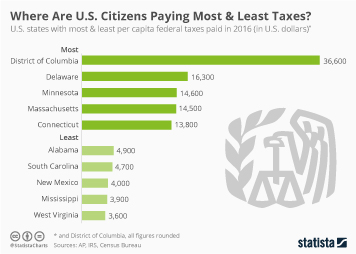 This chart shows U.S. states and the District of Columbia by most & least per capita federal taxes paid in 2016