The Paris Agreement is now five years old. On April 22, 2016 at United Nations Headquarters in New York, 175 parties signed the Agreement. By now, that number has risen to 195 - a staggering achievement - but the road has been far from smooth, with key participant the United States removing its signature under President Trump.

In a speech announcing the United States' withdrawal from the Paris climate change agreement in 2017, President Trump said that the decision was made in order to "fulfil my solemn duty to protect America and its citizens". Senate Majority Leader Mitch McConnell subsequently hailed Trump "for dealing yet another significant blow to the Obama administration's assault on domestic energy production and jobs".

The rejection of the agreement was met with rebukes from other world leaders and climate change experts. Merkel, Macron and Gentiloni of Germany, France and Italy released a joint statement, saying: “We deem the momentum generated in Paris in December 2015 irreversible and we firmly believe that the Paris Agreement cannot be renegotiated, since it is a vital instrument for our planet, societies and economies”.

In January though, it was President Biden's turn to reverse the actions of his predecessor. As part of a flurry of executive action on his first day in the White House, Biden wrote to the UN Secretary-General to inform him of the United States' intention to rejoin the agreement. After a 30-day notice period, the U.S. once again began officially working with the rest of the world to achieve its climate goals. 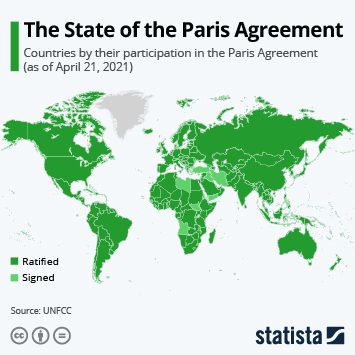 This chart shows the countries that have ratified or signed the Paris agreement as of April 21, 2021.