Founded in 1995 as a mobile telephony company, TIM acquired the fixed-line telecom company Telecom Italia in 2015, becoming a fixed-line and mobile telephony and data service provider. Today, TIM is headquartered in Rome, Milan, and Naples, and is one of the major players in the Italian telecommunication industry, a market that generated revenues of almost 28 billion euros in 2021. In that same year, Italy recorded around 20 million fixed-telephone subscriptions, roughly 18.7 million broadband and ultra-broadband fixed-lines subscriptions, and over 78 million SIM cards.

Despite being one of the market leaders, TIM ’s annual revenue decreased over recent years, dropping to around 15.3 million euros in 2021. Similarly, the company employed increasingly fewer people in the same timeframe, totaling around 42,400 employees in 2021. By contrast, the number of TIM mobile lines has fluctuated, reaching 30.5 million in 2021, as has TIM’s churn rate, dropping to 14.7 percent in the same year.

In the telecommunications industry, TIM competes with the likes of Vodafone, Iliad, WindTre, and Fastweb, although it leads both the fixed-line and mobile telecommunication markets. Particularly, as of 2022. TIM occupies around 43 percent of the fixed-network communication market and commands over half of the fixed-line broadband market. Furthermore, in 2021, TIM held almost 30 percent of the mobile network market, especially the data segment, closely followed by Vodafone and WindTre.

Also known as TIM Brasil, TIM S.A. is a subsidiary of TIM Group headquartered in Rio de Janeiro, with a headcount of around 9,400 employees in 2021. With revenues of over 18 billion Brazilian reals (roughly 3.52 billion euros) generated in the same year, TIM Brasil is one of the major telecommunication companies in the Latin American country. Mobile service is the most profitable segment, accounting for over 90 percent of the company’s total revenue in 2021. Similarly to Italy, the number of customers has fluctuated, with a total of 811,000 fixed-line subscribers and 52 million mobile subscribers in 2021.
This text provides general information. Statista assumes no liability for the information given being complete or correct. Due to varying update cycles, statistics can display more up-to-date data than referenced in the text. 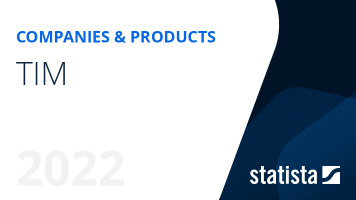 The most important key figures provide you with a compact summary of the topic of "TIM" and take you straight to the corresponding statistics.

TIM in the Italian telecom market