Being perhaps the most important segment in the consumer electronics industry in Italy, smartphones have evolved to become the devices without which Italians could not live. Across the peninsula, the number of smartphone users has dramatically increased in the last five years and is forecast to peak at almost 42 million users by 2025.

Samsung and Android rule over Apple

Despite their vital importance, most Italians do not seem to be willing to buy pricy smartphones such as the iPhone. In 2021, the average amount spent on a smartphone was 360 U.S. dollars. In the same year, Samsung was the leading smartphone vendor, while Apple and Huawei ranked second and third, holding around 24 and 19 percent of the market, respectively. Furthermore, new vendors that run their devices on Android, for example, Xiaomi and Oppo, are gaining more and more in popularity. Consequently, the gap between Android and Apple’s operating system, iOS, is quite evident. In 2021, Android occupied almost 75 percent of the mobile operating system market, while Apple’s iOS accounted for much of the remaining 25 percent.

Nowadays, smartphones are mostly used to surf the internet, whether at home or outside. By contrast, voice calls and SMS are now made and sent through free messaging apps such as WhatsApp and Facebook Messenger. Aware of this trend, mobile carriers have begun to offer increased volumes of data as part of their subscription plans. According to a 2021 Statista survey, most Italians had a subscription plan that included more than 12 GB. As regards to mobile carriers, the Italian telecommunication industry is mainly ruled by three major players - Wind 3, Tim, and Vodafone – with each occupying around 30 percent of the market.

In recent years, the above-mentioned telco companies have been developing their 5G (fifth generation) services throughout the Italian peninsula to guarantee a better and faster connection. By 2025, when around 38 percent of mobile connections will be 5G, the cumulative costs of deploying 5G enhanced mobile broadband (eMBB) in Italy is expected to reach around 8.5 billion euros.
This text provides general information. Statista assumes no liability for the information given being complete or correct. Due to varying update cycles, statistics can display more up-to-date data than referenced in the text.

Most popular smartphone brands in Italy 2021 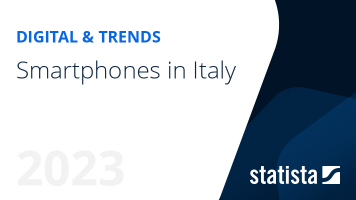 The most important key figures provide you with a compact summary of the topic of "Smartphones in Italy" and take you straight to the corresponding statistics.