Published by
M. Garside,
Dec 3, 2021
As a key binding agent in concrete and mortar, cement is extensively used in the United States construction industry in residential, non-residential, and public works building projects. As of 2020, there were 98 cement production facilities located across the country, including two in Puerto Rico. Cement production in the U.S. amounted to an estimated 90 million metric tons in 2020. That year, Texas, Missouri, California, and Florida were the leading states in terms of cement production.
To produce cement, a mixture of lime, silica, alumina, and other mineral ingredients are ground and heated at high temperatures to produce the intermediary product clinker. Domestic production of clinker in the United States has risen consistently over the past decade. When the clinker material is ground and then mixed with gypsum, cement is produced. Concrete is made when cement is mixed with water and coarse aggregates like stone and gravel. In 2020, over 70 percent of the cement used in the United States was for ready-made concrete mixes.

Cement’s link to the U.S. economy

With the construction industry relying heavily on cement, trends in consumption of the building material tend to resemble trends in the overall economy. For instance, the apparent consumption of cement in the United States has increased over the past decade, though it is still well below levels seen before the 2008 financial crisis. This phenomenon can also be observed in U.S. cement prices. Prices decreased in the years following the economic downturn but have increased steadily as consumption has increased. Despite these developments in consumption and prices, employment in the U.S. cement industry has remained relatively stable over the years.

As the United States ranks among the world’s top cement producing countries, a multitude of cement companies operate throughout the country. Swiss-based LafargeHolcim operates 13 production plants and has a distribution network serving 43 states. HeidelbergCement, a German multinational, has been operating in the United States since its purchase of the Lehigh Cement Company in the 1970s. In addition to cement plants, HeidelbergCement operates sand, gravel, and hard stone production facilities in the U.S.

In the following 6 chapters, you will quickly find the 25 most important statistics relating to "Cement industry in the U.S.".

The most important key figures provide you with a compact summary of the topic of "Cement industry in the U.S." and take you straight to the corresponding statistics.

Construction equipment industry in the U.S. 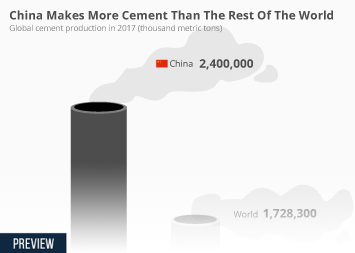 China Makes More Cement Than The Rest Of The World