The world crude steel production amounted to over 1.86 billion metric tons in 2020, a stable volume compared to 2019. While the Covid-19 pandemic did not contribute to a noticeable slump in production, a drop in steel prices negatively impacted revenues from global leaders in the steel market such as ArcelorMittal and Nucor Corporation. Monthly crude steel production in 2020 also fluctuated due to the health crisis, with dips recorded between February and June of that year in the main producing countries. China, the world’s largest producer of steel, recorded an 11 percent drop in the span of two months, between December 2019 and February 2020. However, after a strong fourth quarter of 2020, projections for 2021 are optimistic: Crude steel demand worldwide is forecasted to rise by around 70 million metric tons. Hot-rolled coil steel prices worldwide are also estimated to grow to some 555 dollars per metric tons in 2021.

The European Union and the United States were the world leading steel importers in 2019, recording respectively an import volume over 40 and 27 million metric tons. China was the leader of the steel export market in 2019, dwarfing all other countries by over 30 million metric tons. Overcapacities in the sector became the new normal when China, the world's largest producer of steel, ramped up production and flooded the markets, including the United States, with cheap steel. However, Canada was the main source for the United States' imports for consumption of steel products in 2020, representing close to four billion U.S. dollars of steel products.
The Luxembourg-based steel maker ArcelorMittal was the world’s largest crude steel producer in 2019, with an output of over 97 million metric tons of crude steel. It was followed closely by the China-based Baowu Group, which overtook ArcelorMittal as the largest steel company based on sales as of March 2020. Reporting revenues of close to 80 billion U.S. dollars, the Baowu Group had made over nine billion more than its main competitor.

Diverse uses for a widely-recycled alloy

More than half of the steel end-usage worldwide was in the building and infrastructure sector in 2019, with mechanical equipment and the automotive sector ranking second and third. Steel is an alloy which is typically made by combining its main ingredient, iron, and other elements. These additional elements, coupled with the right temperature, play a crucial role when it comes to changing the metal's properties in terms of strength, toughness, ductility, weldability, and durability. The perfect combination of iron and other elements, including manganese, carbon or base metals such as nickel and copper, helps produce the type of steel that is the best fit for a certain need. In light of increasing environmental awareness, it has to be emphasized that this ferrous metal is one of the most widely recycled materials worldwide. In 2019, worldwide consumption of steel scrap came to around 491 million metric tons.
This text provides general information. Statista assumes no liability for the information given being complete or correct. Due to varying update cycles, statistics can display more up-to-date data than referenced in the text.
Published by Statista Research Department, Apr 20, 2022 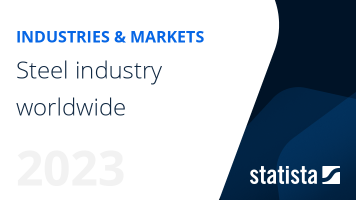 The most important key figures provide you with a compact summary of the topic of "Steel industry worldwide" and take you straight to the corresponding statistics.