The chemical industry is one of the largest and most important industries worldwide. The United States is one of the largest national producers of chemical products globally. Including the pharmaceutical sector, its chemical shipments value was almost 770 billion U.S. dollars in 2021. The value added by U.S. chemistry in that same year amounted to over 438 billion U.S. dollars.

In 2016, several of the leading global chemical companies announced mergers, effectively changing the dynamics of the global chemical industry. One of the most famous mergers that happened at that time was the Dow Chemical and DuPont merger, which was cleared by European regulators in March 2017. Following the finalization of the merger in September 2017, the new conglomerate DowDuPont existed as a single entity until April 2019, when it separated into three companies: Dow, DuPont, and agricultural chemistry company Corteva.

Corresponding with its dimension, the chemical industry is an important employer. Approximately 537 thousand people work at U.S. chemical companies, excluding the pharmaceutical sector. This number is distinctly lower than in the early 2000s, when over 600 thousand employees were reported. In 2019, an average U.S. chemical production worker had a working week of 42.3 hours, and in 2021 had an hourly wage of 27.39 U.S. dollars.

The U.S. chemical industry spends relevant amounts for research and development. In 2021, more than 11 billion U.S. dollars were spent for R&D purposes in the chemical industry. R&D funds have remained fairly stable over the last decade. Accordingly, the United States is the global leader in developing new chemical and pharmaceutical entities.
This text provides general information. Statista assumes no liability for the information given being complete or correct. Due to varying update cycles, statistics can display more up-to-date data than referenced in the text.
Published by Lucía Fernández, Aug 12, 2022 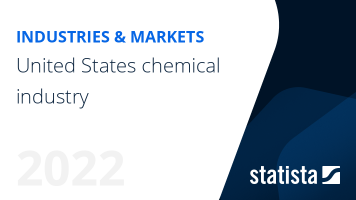 The most important key figures provide you with a compact summary of the topic of "Chemical industry in the United States" and take you straight to the corresponding statistics.