Published by Lucía Fernández, Nov 17, 2022
As a whole, the global chemical industry consists of many companies, but is dominated by a handful of top players. These companies have secured the top five places in the chemistry business worldwide. Accounting for more than one-tenth of global chemical exports, Germany has always been a stronghold of the global chemical industry, thus, it is no wonder that BASF, a German company, ranks as the number one chemical company worldwide based on revenue. Two United States-based companies – Dow and LyondellBasell – are also among the world's top five chemical companies based on revenue. This top five ranking is completed by LG Chem from South Korea and Mitsubishi Chemical Holdings from Japan.

In the following 6 chapters, you will quickly find the 31 most important statistics relating to "Top chemical companies". 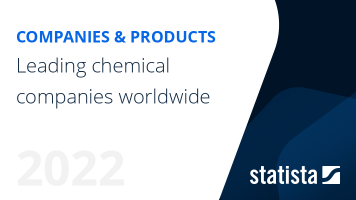 The most important key figures provide you with a compact summary of the topic of "Top chemical companies" and take you straight to the corresponding statistics.

Chemical industry in the United States