Published by S. Lock, Oct 6, 2021
The tourism sector has seen significant growth in recent times, with both leisure travel spending and business travel spending seeing year-over-year growth over the past five years. While this growth allows for opportunities like job creation and socioeconomic development, it also leads to issues like the global rise in greenhouse gas emissions, overcrowding, and a loss of socio-cultural authenticity in host communities. As a result of these issues, there has been a growing movement towards sustainable tourism in recent years. Sustainable tourism is a form of tourism that takes full responsibility for its current and future economic, social, and environmental impacts, by looking at the the needs of visitors, the industry, the environment, and host communities.

What are the effects of growing global tourism?

It is hard to measure the cumulative effect that the tourism industry has on the climate crisis as, unlike with other industries, there is not one clear product. It incorporates many industries, including lodging, transport, attractions, travel companies, and many more. However, a 2019 report from the United Nation’s World Tourism Organization (UNWTO) stated that tourism-related transport alone was a significant contributor to climate change, with five percent of global carbon dioxide emissions being attributable to this.

Overtourism is another problem that comes with the growth of the global tourism industry. The UNWTO defines overtourism as "the impact of tourism on a destination, or parts thereof, that excessively influences perceived quality of life of citizens and/or quality of visitor experiences in a negative way". In essence, it is the overcrowding resulting from an overwhelming number of visitors to a specific location. Cities like Amsterdam and Barcelona have both fallen prey to this, as have tourist destinations such as Machu Picchu and Bali. This overcrowding has not gone unnoticed by travelers and, during a 2020 survey, just over half of the travelers asked stated that they would visit alternative destinations to avoid traveling during peak seasons.

There are also more nuanced issues that are caused by the growth of tourism, including the loss of natural heritage and biodiversity, loss of socio-cultural authenticity of host communities, and a lack of fairly distributed socio-economic benefits to local communities.

While these issues remain relevant today, the awareness for social and environmental responsibility is growing among travelers. As a result, almost half of global travelers believe that choosing an environmentally friendly travel option is important. This is especially prevalent amongst the younger generations, with over half of Gen Z and Millennial travelers stating that they agree with this sentiment. Meanwhile, those from the Gen X and Baby Boomer generations had a more neutral attitude towards choosing an environmentally friendly travel option. One way travelers are putting sustainable tourism into practice is by staying in eco-friendly or green accommodations – a concept that has helped companies like Airbnb become more popular in recent times. However, while many travelers would like to travel in a more sustainable manner, their belief in the tourism industry’s efforts to become more sustainable remains low. During a survey in 2020, respondents were asked about the sustainability efforts in selected sectors of the tourism industry, including accommodation, train operators, bus tour operators, airlines, and cruise companies. The majority of respondents believed that each one of these sectors was making little to no effort to be sustainable.

In the following 4 chapters, you will quickly find the 18 most important statistics relating to "Sustainable tourism".

The most important key figures provide you with a compact summary of the topic of "Sustainable tourism" and take you straight to the corresponding statistics. 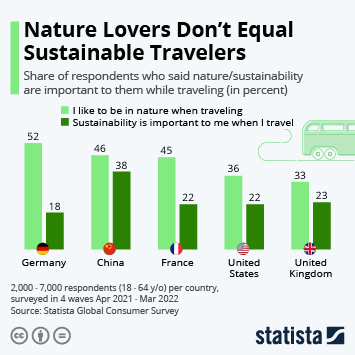 survey on the importance of nature and sustainability when travelling