Hugo Boss AG is a German luxury company that was founded in 1924. The company manufactures clothes for men and women, as well as fragrances, cosmetics, watches, and eyewear through licensed agreements. In 2021, the company's global revenue amounted to approximately 2.79 billion euros, a significant turnaround after the previous year's low revenue results induced by the impact of the pandemic and lockdown measures. In the same year, Hugo Boss' Asia-Pacific sales generated the lowest amount of net sales compared to other markets. The largest share of revenue came from Europe, the Middle East, and Africa.
Hugo offers its products under two major brands, namely, HUGO and BOSS. The unisex brands of the company comprise BOSS Black, BOSS Orange, BOSS Green, and HUGO brand. BOSS Selection is the company’s men’s clothing brand, and has the largest sales share of any Hugo Boss brand. The company sells its products in Europe, Asia, the Middle East, Africa, and the Americas, with over twelve hundred stores worldwide.

The company envisions increasing revenue by streamlining its operations and focusing more on the core brands of the company. Hugo Boss leverages targeted marketing measures to raise the appeal of its brands. Post-pandemic, the company spent over 200 million euros on its global marketing campaign. In 2020, this value was significantly lower compared to previous years. Apart from above-the-line marketing instruments such as print and out-of-home media, the relevant target groups are increasingly reached using digital channels. In light of the expansion of the Group’s own retail business, the importance of point-of-sale marketing is also mounting.

In the United States, Hugo Boss remains a prestigious and highly sought-after brand. Hugo Boss carries a range of luxury fragrances for men and women. In 2020, it was estimated that over three million Americans used Hugo Boss branded shaving lotion or cologne. Likewise, Hugo Boss cologne was also a popular gift among Americans that year. Although the brand is not very often associated with women’s personal care products, it is estimated that over 800,000 consumers in the United Kingdom used Boss by Hugo Boss women’s perfume in 2020, making it the most popular women’s fragrance by the brand in the UK in that year.
This text provides general information. Statista assumes no liability for the information given being complete or correct. Due to varying update cycles, statistics can display more up-to-date data than referenced in the text.
Tugba Sabanoglu
Research lead covering Non-food CG & Retail
Get in touch with us now
Published by Tugba Sabanoglu, Jun 21, 2022

Number of Hugo Boss stores worldwide in 2021, by region 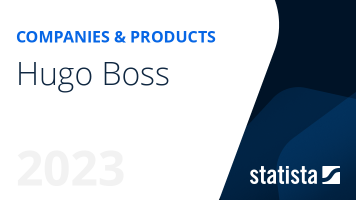 The most important key figures provide you with a compact summary of the topic of "Hugo Boss" and take you straight to the corresponding statistics.